Professor at Centre for Gender Research

Current research: representations of childlessness, reproductive decision-making in relation to climate change and environmental issues, and gender in AI and machine learning.

I teach gender studies at all levels, and supervise Ph.D. candidates. I am one of the work package leaders in in MotherNet, a network of researchers on contemporary European motherhood, which has received funding from the European Union’s Horizon 2020 research and innovation programme under grant agreement No 952366.

Between 2012 and 2020 I was senior editor (with Ulrika Dahl) of the Nordic LGBTQ studies journal lambda nordica.

My current research deals with: 1) representations of childlessness, 2) reproductive decision-making in relation to climate change and environmental issues, and 3) gender in AI and machine learning.

I do research on childlessness and non-motherhood as part of MotherNet, a project that has received funding from the European Union’s Horizon 2020 research and innovation programme under grant agreement No 952366. I am the editor (with Dovilė Kuzminskaitė and Julie Anne Rodgers) of the volume Negotiating Non-Motherhood: Representations, Perceptions, and Experiences (under contract with Palgrave Macmillan). Thevolume focuses on the representations, perceptions, and experiences of women who do not have children against the backdrop of traditional gender norms, pronatalist policies and patriarchal structures. While involuntary and voluntary childlessness have typically been treated separately and studied within different disciplines in previous scholarship, we explore non-motherhood beyond the involuntary/voluntary divide and consider a wide range of conceptualizations of women who do not become mothers. We bring together a variety of perspectives from different national contexts and from different disciplines, including literary and cultural studies, gender studies, sociology, and anthropology to explore non-motherhood. In this volume, and elsewhere, I write about representations of non-motherhood in twenty-first-century Swedish literature.

Reproductive decision-making in relation to climate change and environmental issues

How do we make sense of family-building when climate change and other environmental issues threaten human life? This question forms the point of departure for my research in collaboration with Maja Bodin, who holds a PhD in reproductive health. We have published an article on how lay people reason around reproductive decision-making in relation to climate change and environmental issues, and we apply for funding for a larger project that includes focus group discussions with activists as well as a media study.

Gender in AI and machine learning

In this interdisciplinary project—a collaboration with Hannah Devinney and Henrik Björklund from the Department of Computing Science at Umeå University—we use methods from gender studies, comparative literature, and computer science to study how bias is represented in text, how it enters into machine learningalgorithms, and how to measure and avoid bias in these algorithms. Since machine learning algorithms, as part of artificial intelligence systems, are increasingly used by businesses and authorities to make significantdecisions in our lives, the questions of how these decisions are made and how fair they are grow more pressing. Machine learning models are trained on data produced by humans, and their tendency to perpetuate bias and stereotypes in human language is a serious societal problem. The overall goal of this project is therefore to contribute to the creation of fair ML models for natural language processing (NLP) tasks.

Most recent book: mothers who leave their families

The point of departure for my most recent book, Maternal Abandonment and Queer Resistance in Twenty-First-Century Swedish Literature (Palgrave Macmillan, 2021), is the question what it means that so many mothers in twenty-first-century Swedish literature leave their families. I analyze literary representations of maternal abandonment in relation to sociopolitical discourses on motherhood, family, and gender equality in contemporary Sweden. While previous scholarship on motherhood in literature uses feminist theory and theories on motherhood, I draw on a queer-theoretical tradition, which explores failure and negativity as resistance. The queer-theoretical framework makes it possible to discover new themes—norm-critical dimensions, failure, and ambivalence—in literature about motherhood. By acknowledging the norm-criticalaspects of the novels, I show how literary representations of primarily heterosexual mothers who leave their families can be seen as resistance against norms in the Swedish society, such as involved parenthood, the nuclear family, and pronatalism.

Here is a link to the book.

My research interests also include queer studies, bodies, materiality and spaces, and women and modernism:

One of my primary research interests is queer studies with a focus on Swedish literature. In my book Lesbianism in Swedish Literature: An Ambiguous Affair (Palgrave Macmillan, 2014) I trace the literary discourse on lesbianism in Sweden from 1930 to 2005 by analyzing lesbian-themed literature and investigating the ways that it confirms and/or challenges sociopolitical discourses on lesbianism during this time period. I find that Swedish literary discourses on lesbianism provocatively contrast with a widely accepted view that attitudes toward homosexuality have gradually become more tolerant in the Western world. Instead of reflecting a progression, Swedish texts are surprisingly consistent over time; medicalizing discourses persist alongside emerging discourses that idealize lesbianism. The lasting power of negative discourses in literature leads us to question the image of Sweden as primarily progressive and gay-friendly; Sweden’s progressive laws surely reflect certain progressive attitudes toward homosexuality, but medicalizing discourses and homophobia still prevail.

My research in this field shows how it can be fruitful to analyze text and film material through the lens of theories on bodies and spaces. I also use cultural representations in order to develop concepts from feminist and/or queer theory. In one of these publications I bring together concepts and theories from feminist phenomenology with queer theory in order to understand the coming-out process in Swedish young adult novels. In another publication I use feminist phenomenology to take María Lugones’s concept world-travelling further in a reading of Lukas Moodysson’s film Mammoth.

My Ph.D. thesis deals with three women poets—Ella Hillbäck, Rut Hillarp, and Ann Margret Dahlquist-Ljungberg—and their relationship to the Swedish modernist movement of the 1940s. I have also published research on Stella Kleve, Edith Södergran, and Eva Neander.

Between 2012 and 2020 I was senior editor (with Ulrika Dahl) of the Nordic LGBTQ studies journal lambda nordica. I have also edited several volumes, including New Dimensions of Diversity in Nordic Culture and Society (with Ursula Lindqvist, Cambridge Scholars Publishing, 2016). 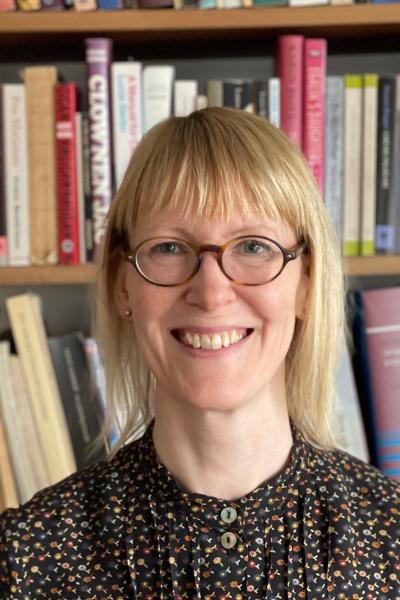