Dr. Öberg was one of the founders and coordinator of the European Neuroendocrine Tumor Network (ENET) 1995-2000 and was past chairman of the Nordic Neuroendocrine Tumour Group. He has pioneered the treatment of carcinoid tumor patients with interferon and somatostatin analogues and developed assays for tumor markers such as Chromogranin A and radiological procedures including specialized PET scans.

In 1988 he was the first to describe a genetic deletion in multiple endocrine neoplasia Type 1 (MEN1). Dr Öberg has given many hundreds of presentations at international meetings and published more than 500 papers within his research field, H-factor 64 and more than 12,000 citations. In addition he is the author of numerous chapters on Carcinoid tumors in several international textbooks including William’s Textbook of Endocrinology, Leslie de Groot’s Textbook of Endocrinology, Clinical Endocrinology and Fordtran’s Textbook of Gastroenterology. Dr. Öberg is Editor-in Chief of World Journal of Gastroenterolgy (WJG). 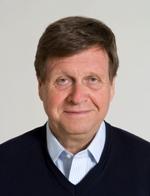