Amanda Lagerkvist is Professor of Media and Communication Studies and a founder of existential media studies. Her current work focuses on disability and datafication, biometric automation of human life and the Earth, an existential ethics of care, and futurological and apocalyptic socio-technical imaginaries of AI. She is the author of the monograph Existential Media: A Media Theory of the Limit Situation (OUP, 2022) Find out more here: http://www.im.uu.se/research/hub-for-digtal-existence

Amanda Lagerkvist PhD., is a Senior Lecturer and Full Professor of Media and Communication Studies at the Department of Informatics and Media, Uppsala University. She is a founder of existential media studies.

Professor Lagerkvist holds a PhD from Stockholm University in 2005. Her doctoral dissertation Amerikafantasier. Kön, medier och visualitet i svenska reseskildringar från USA 1945-63, is a cultural history of the media which places the relationship to the US - activated through physical encounters with the mediated nation - centrally for understanding Swedish postwar media history, and a phenomenological investigation into the intersections of space, lived experience, mediation and traveling.Lagerkvist had a two-year postdoc at SU between 2005-2007. The project "City of the Future: Time, Mediation and Multisensuous Immersion in the Future City of Shanghai" was funded by the Foundation of Anna Ahlström and Ellen Terserus. She was Research Fellow (forskarassistent) at SINAS (The Swedish Institute for North American Studies) at Uppsala University between 2007-2010. During her postdoc years Professor Lagerkvist developed an overarching socio-phenomenological approach to media and memory, exemplified in her monograph Media and Memory in New Shanghai: Western Performances of Futures Past (Palgrave Macmillan Memory Studies, 2013).

Between 2010-2013 she was Lecturer in Media and Communication Studies at Södertörn University. She became an Associate Professor of MCS in 2010.

Professor Lagerkvist was appointed Wallenberg Academy Fellow in 2013 and between 2014-2018 she headed the research programme ”Existential Terrains: Memory and Meaning in Cultures of Connectivity” (http://et.ims.su.se) at Stockholm University, funded by the Knut and Alice Wallenberg Foundation (KAW) and the Marcus and Amalia Wallenberg Foundation (MAW). The collaboration between KAW and the five Swedish academies within the Wallenberg Academy Fellows program, included a mentorship and leadership training program for ‘Research Leaders of the Future’.

Professor Lagerkvist is now heading the research program "BioMe: Existential Challenges and Ethical Imperatives of Biometric AI in Everyday Lifeworlds" (2020-2024) a project within WASP-HS, funded by the Marianne and Marcus Wallenberg Foundation and the Marcus and Amalia Wallenberg Foundation: https://wasp-hs.org She is the PI of the Uppsala Informatics and Media Hub for Digital Existence: https://www.im.uu.se/forskning/uppsala-informatics-and-media-hub-for-digital-existence/

Professor Lagerkvist was Visiting Scholar at King’s College, London for the academic year of 2018/19, invited by Professor Anna Reading, The Dept. of Culture, Media and Creative Industries. She was invited to lecture at the Oxford Internet Institute, the Digital Ethics Lab, headed by Professor Luciano Floridi, https://digitalethicslab.oii.ox.ac.uk/ (October 23, 2019).

She was invited to speak at the Into the Air Symposium, Carleton University, Ottawa, Canada (the 20th anniversary of the publication of John Durham Peters’ seminal book Speaking into the Air: A History of the Idea of Communication) where she gave a talk about its reception in Sweden and role in the development of existential media theory. Published here: http://journalcontent.mediatheoryjournal.org/index.php/mt/article/view/151

Amanda Lagerkvist served on the Board and Screening Committee of the Fulbright Commission Sweden (January 2019-December 2020), and was Chair of the Board of the network ‘Digital Humanities Uppsala’ for two years (2019-2020). She is now serving in the Recruitment Group for Lectureships at the Faculty of Social Sciences, Uppsala University.

Professor Lagerkvist's current work and development of existential media studies (EMS) applies and updates classic phenomenological resources in the philosophy of existence to contemporary stakes of digital media and automated media technologies. The overarching aim of EMS is to explore what it means to be human in the digital age, in light of the fact that digital media are both ontologically 'the infrastructures of our being' (as John D. Peters puts it, 2015) and anthropological sites of the limit situations of human life where individuals and groups explore, tackle, and cope existentially (Jaspers 1932/1970). With a particular but not exclusive focus on death online, she developed a theoretical framework for existential media studies, focusing on digital-human vulnerabilities of online mourning, commemoration, and the digital afterlife. The Existential Terrains programme which she headed between 2014-2018, made headway in contributing with an existential approach to digital culture in media studies, while simultaneously contributing to the two subfields death online research and digital memory studies. The programme was the first media studies project in the world that researched the existential dimensions of digitalization, both empirically and theoretically.

Professor Lagerkvist is now taking existential media studies in new and urgent directions, by heading the research program "BioMe: Existential Challenges and Ethical Imperatives of Biometric AI in Everyday Lifeworlds" (2020-2024), a project within WASP-HS, funded by the Marianne and Marcus Wallenberg Foundation and the Marcus and Amalia Wallenberg Foundation: https://wasp-hs.org She is the PI of the Uppsala Informatics and Media Hub for Digital Existence: https://www.im.uu.se/forskning/uppsala-informatics-and-media-hub-for-digital-existence/

In her monograph Existential Media: A Media Theory of the Limit Situation (Oxford University Press, 2022), Lagerkvist introduces existential media studies through a re-appreciation of Karl Jaspers' philosophy, and his concept of the limit situation. The book theorizes media of, at and as limits; it also offers a reframing of digital media culture through centering empirically on mourning practices and experiences at the limit.

Lagerkvist recently received a three-year grant from Riksbankens jubileumsfond (RJ): ”Dismedia: Technologies of the Extraordinary Self.” (Funkismedier: Det extraordinära självets teknologier”) (2023-2026). As co-applicant she also received a six-year grant from Riksbankens jubileumsfond (RJ) for the national research programme: “At the end of the world: A Transdisciplinary Approach to the Apocalyptic Imaginary in the Past and Present” (”Vid världens slut. En transdisciplinär utforskning av apokalyptiska föreställningar i dåtid och nutid”) (2023-2028) headed by Professor Jayne Svennungsson, Lund University. Additionally, she has received a five-year grant from WASP-HS (The Marianne and Marcus Wallenberg Foundation) in a joint venture with Dr. Magnus Strand, the Department of Business Studies, UU for the WASP-HS Guest Professorship Mark Coeckelbergh, University of Vienna, and project: “AI Design Futures” (2023-2027). 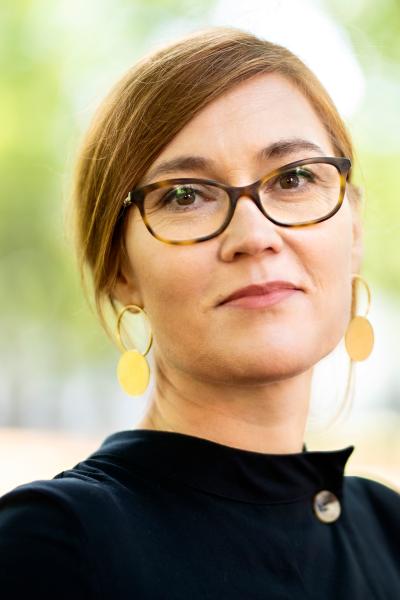