Victoria was born in Hanoi, Vietnam. She grew up and was educated in England. To satisfy her technical curiosities Victoria took a Diploma in Mechanical and Manufacturing Engineering, whereby she gained distinctions, before being fully committed to the Law. After graduating from her undergraduate law degree with honours, she went onto do the Bar Exams in London. Mini-pupillages followed at Gray's Inn and the Temple, upon the completion of which she took up tenancy at 10 King's Bench Walk where she remained throughout her practice at the Bar.
In the meantime, she went to Singapore for a short period as the Inns of Courts' Pegasus Scholar and worked for a leading law firm there. This paved the way for a world outside the English Bar for Victoria, who then did a short stint in the City of London, before moving onto become an In-House Counsel where she continued with her International Commercial/Arbitration work, which took her travelling from Washington through to India.

In realising her academic ambitions, Victoria now finds herself in her current post at Uppsala University, which she considers to be a privilege and an honour. Victoria's research subject continues her chosen career's theme in international commercial arbitration. 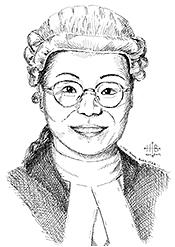