Jonas Eriksson was born in Sundsvall, Sweden in 1973. Studied chemistry at Uppsala University and completed his PhD in 2006 on the topic of 11C-chemistry and under the guidance of Professor Bengt Långström. He then relocated to The Netherlands and continued in the PET field with a postdoctoral position at VU University Amsterdam with Professor Bert Windhorst and was later appointed a permanent position at the PET research department at VUmc Amsterdam. In 2012 he relocated back to Sweden and the Uppsala University Hospital PET centre where he now works as senior researcher in radiopharmaceutical chemistry with affiliation to the Department of Medicinal Chemistry at Uppsala University. His research interests include radiopharmaceutical chemistry, preclinical and clinical PET tracer development. 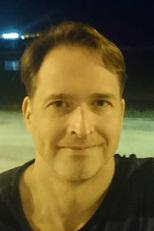